The year-round warm climate here on the coast makes for great opportunities for creating beautiful tropical gardens. However, there’s not exactly a plant nursery section in a big box store here in this part of Ecuador’s coast. There’s really not even a big box store, with the minor exception of Mi Comisariato at the El Paseo shopping center in Portoviejo. So, where can you buy palms, fruit trees, and flowers for your new home?

The place to go is the small town of Sosote, just outside of Portoviejo. Sosote is better known as the source of tagua jewelry for this part of Ecuador. Here as you pass through the town, bisected by the new four-lane highway to Portoviejo, you’ll see a dozen or more road-side stores selling tagua jewelry in addition to clay pots of all sizes, coconuts and  ropes of blood sausage. I should mention that the latter is not recommended. Poor Tom learned the hard way a few years back and still recoils at even the mention of sausage from Sosote.

In the midst of these numerous roadside establishments, you will to come a row of flowers, fruit trees and palms along with a sign saying “Vivero,” meaning nursery. 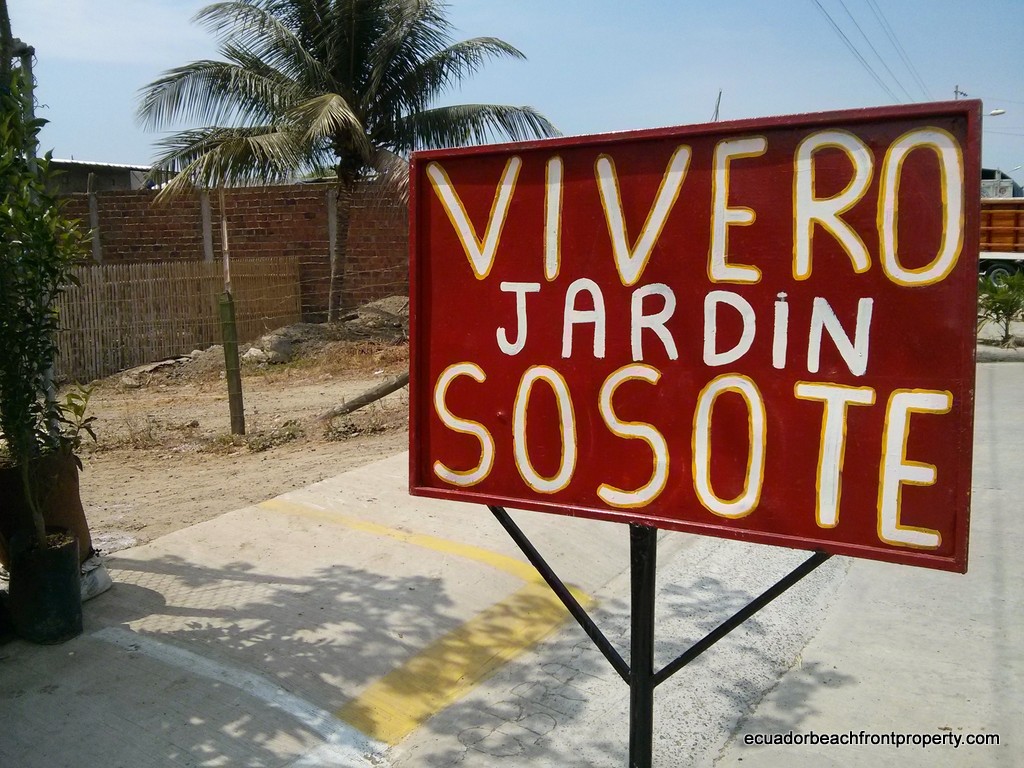 The plant nursery in Sosote offers a tremendous variety of plants for incredibly affordable prices.

Here you can find ornamental plants that you’ll no doubt recognize from back home. The only difference perhaps is the price where most flower varieties run between $0.50-$2.00 each. 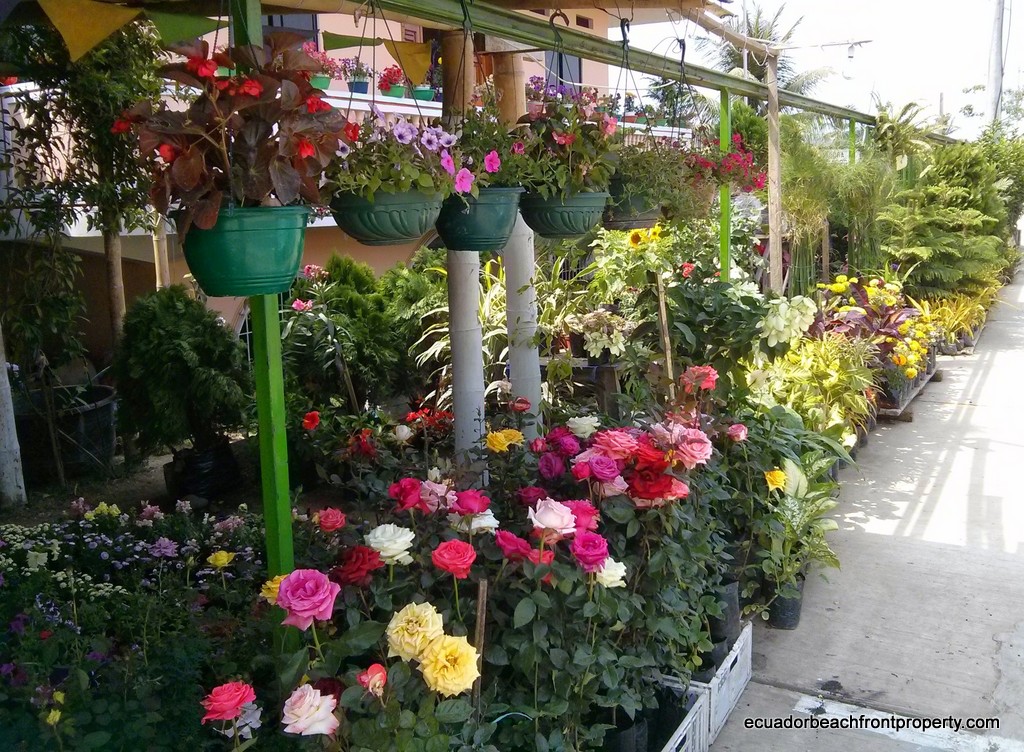 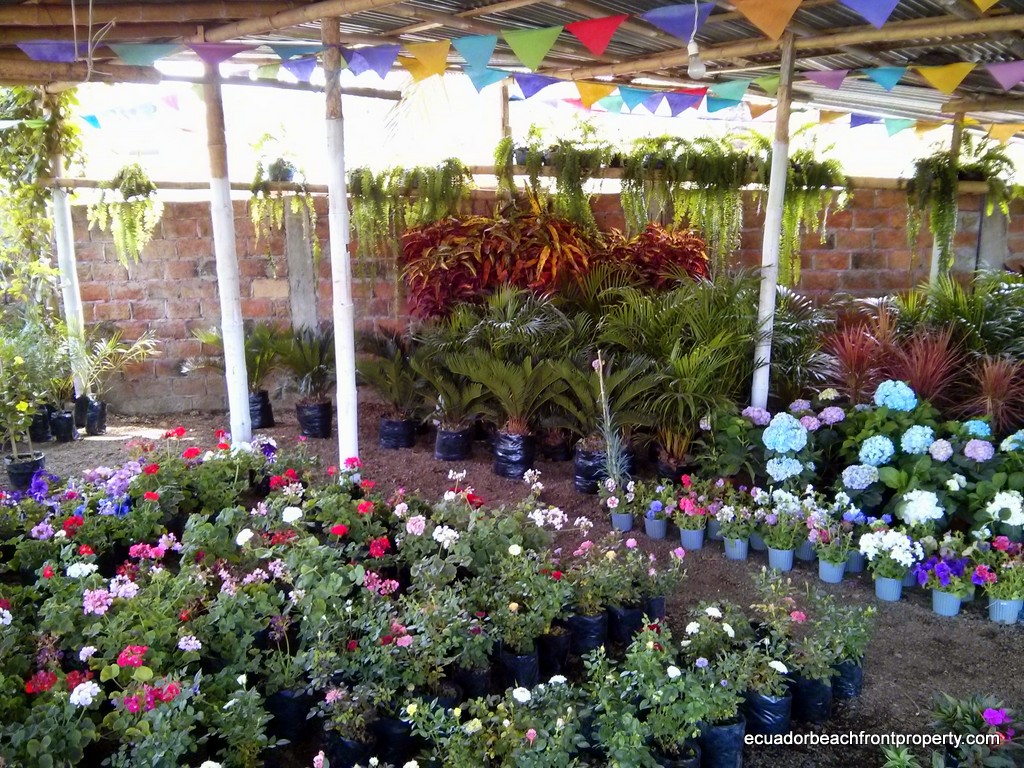 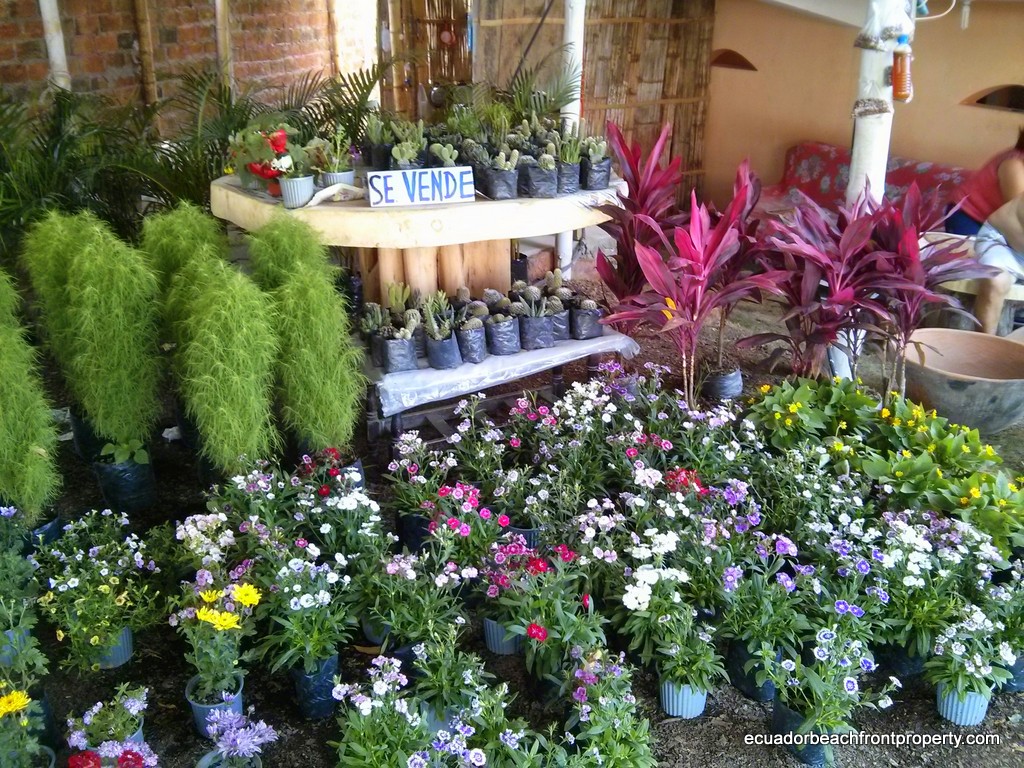 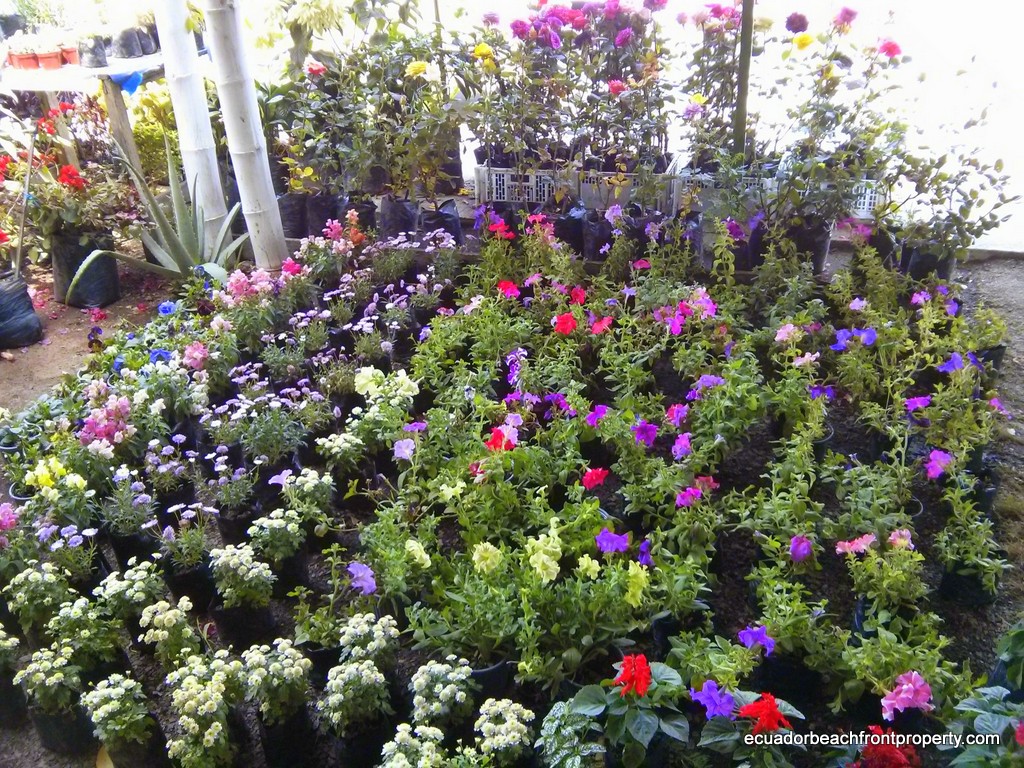 I was treated to some fresh coconut water to sip as I wended by way through the maze of color during my plant shopping spree . 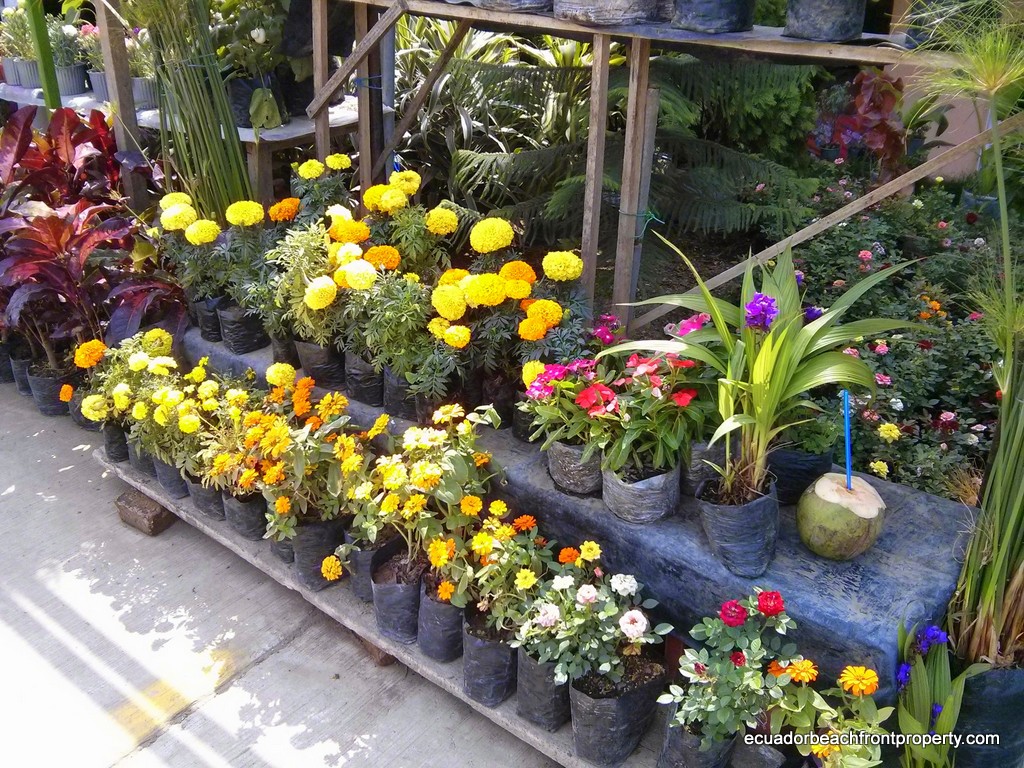 You will also have many varieties of palms to choose from, from coconuts to sago palms. I bought one of the papyrus plants on the right below for $8. 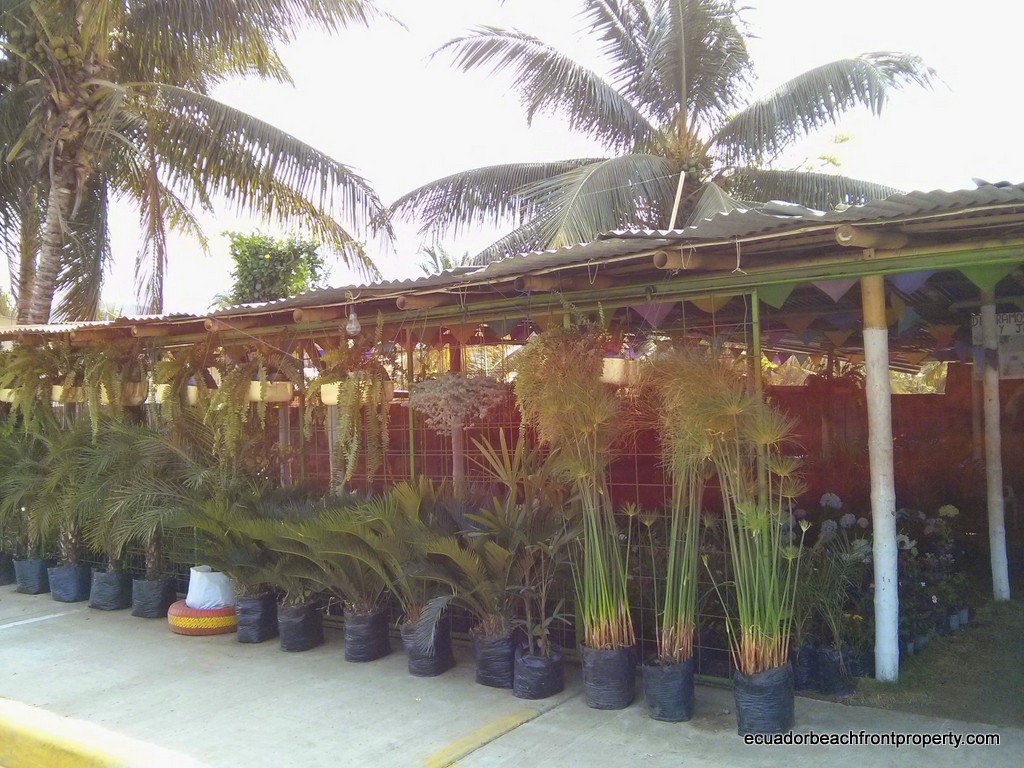 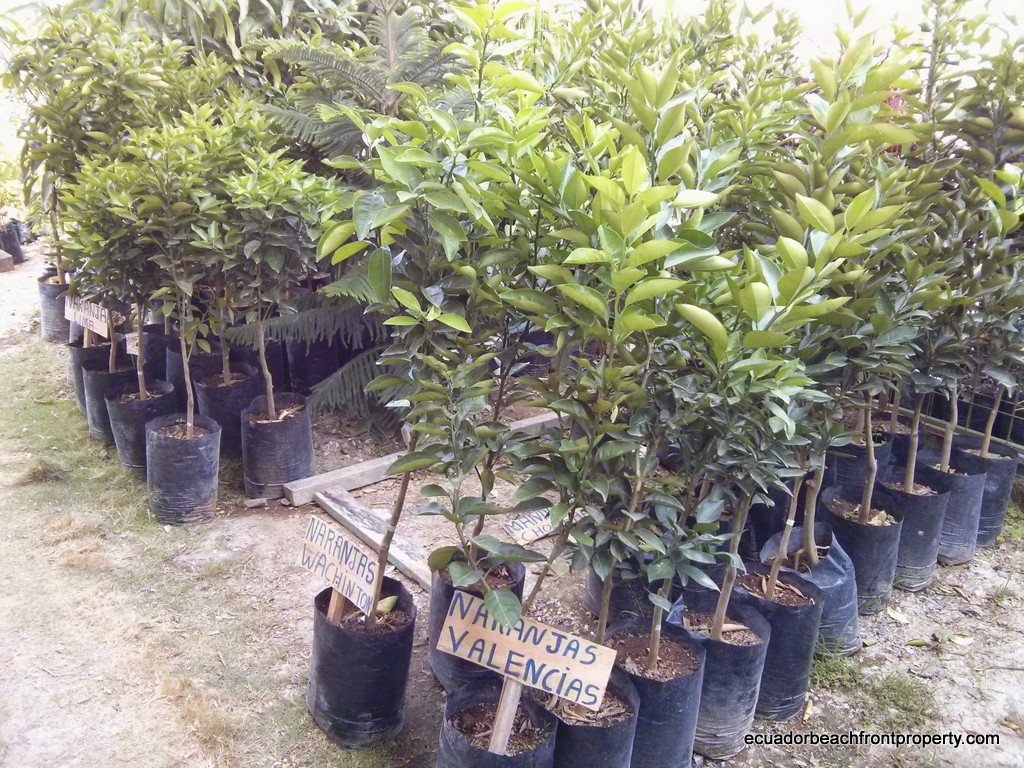 And here’s a mango tree line-up for all you mango fans. 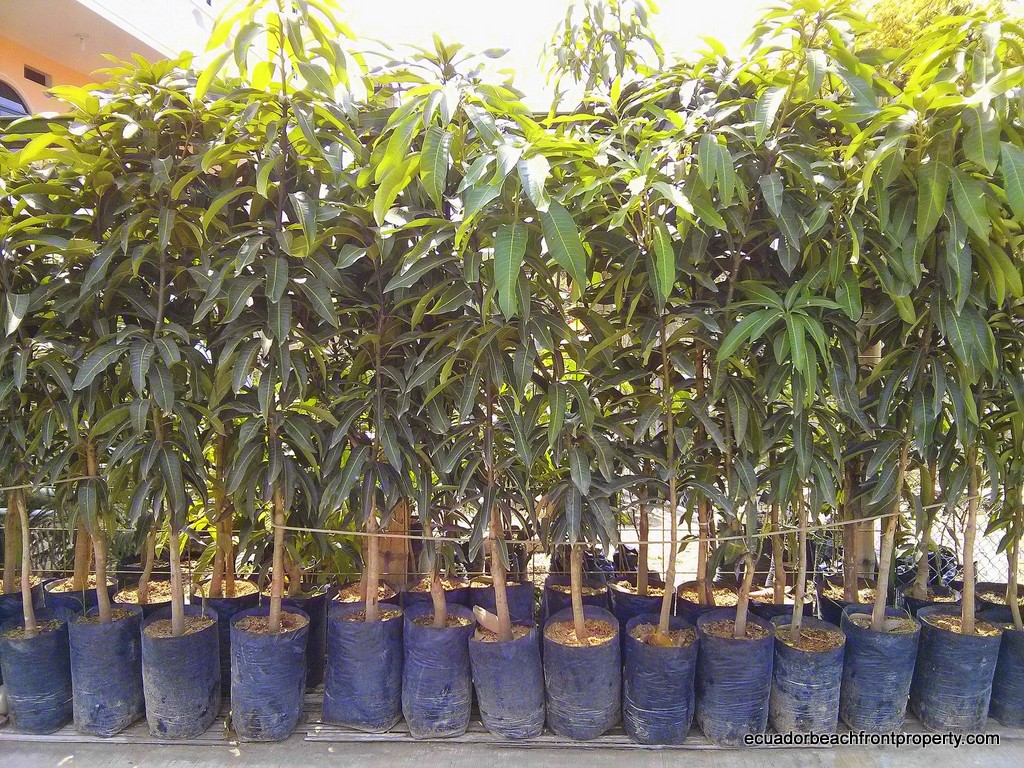 A final view of the nursery from the road to Portoviejo. 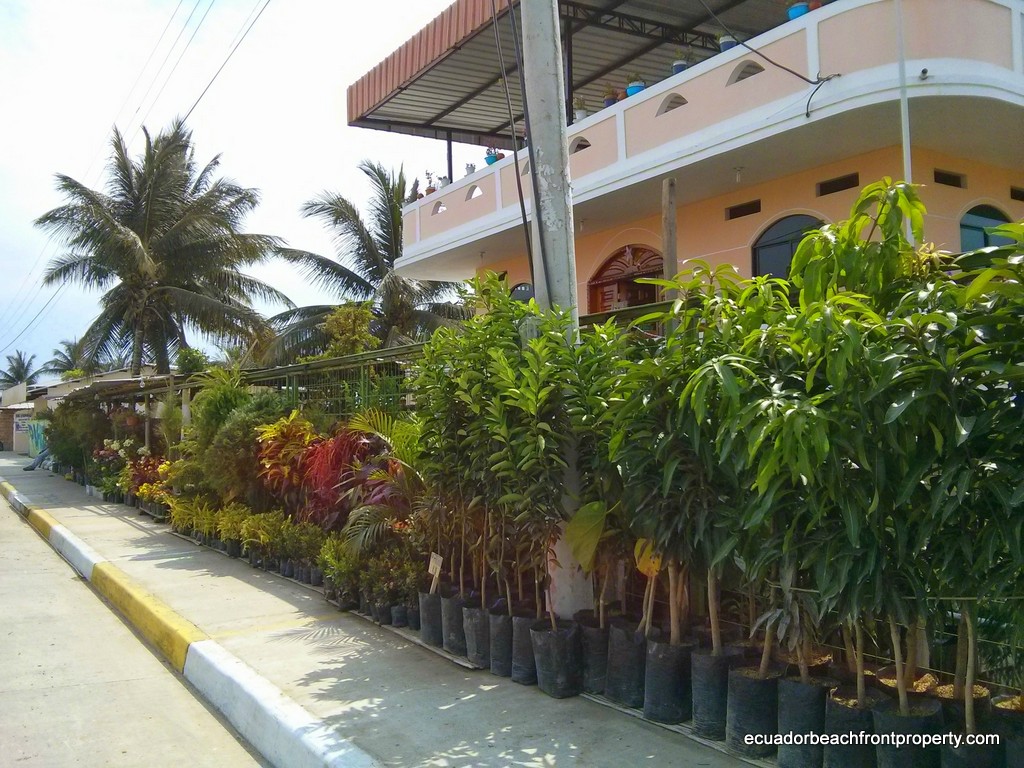 The nursery also sells large bags of mulch for $5 each and even will come do custom landscape work your property. I loaded up both the back seat and the bed of the truck with 4 bags of soil and LOTS and lots of plants and the bill came to $100. I also bought four large clay pots for $25 each (they wouldn’t budge below that price, even with buying four). So my final cost for the day was $200. 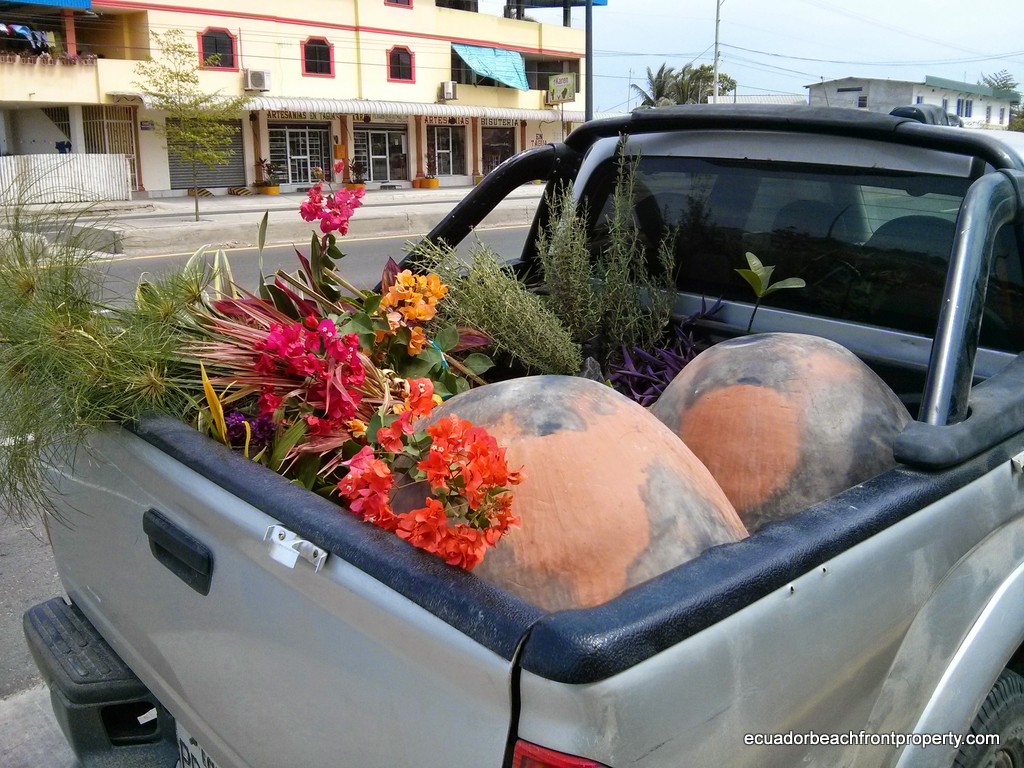 A popular source of local jewelry and touristy trinkets is “tagua” (pronounced “TAWG-wuh”) or “vegetable ivory.” Tagua is a very hard, white nut that grows on six species of palm trees in South America, one species of which is found along Ecuador’s coast. 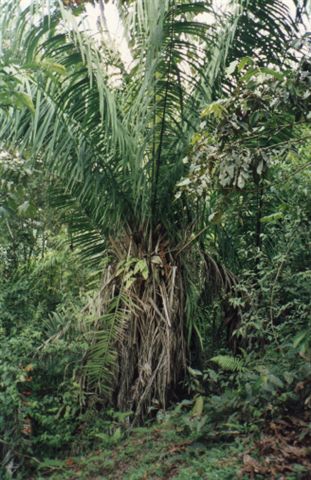 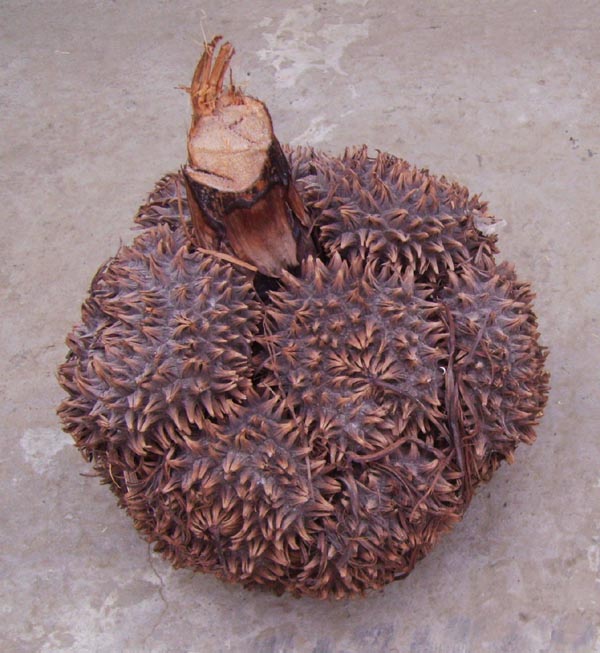 Tagua is referred to as vegetable ivory because once dried, it can be carved and closely resembles the ivory from an elephant’s tusks. 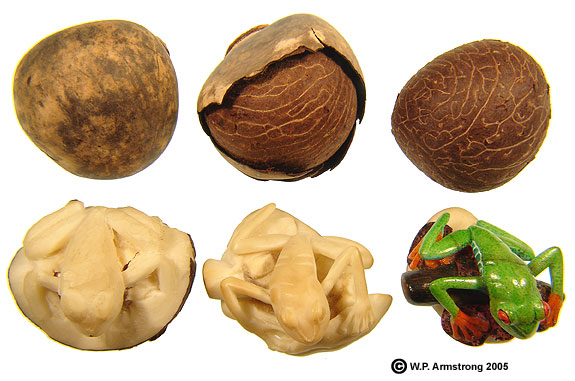 Sequence showing how the tagua nut can be carved and dyed into intricate pieces of art. Image taken from an interesting online article about how the production of tagua helps protect elephants and South American rainforests.

Because of its close similarities to ivory, tagua is now often used as a substitute for ivory in the global market, which not only protects elephants from being killed for their valuable tusks, but also provides many jobs as well as an economic incentive to protect the forests where the palms are found.

Items made from tagua can be purchased in markets across Ecuador but the source of this unique artisanry is here along the Central Coast, especially in the small village of Sosote (“so-SO-teh”), outside of Portoviejo.

The art of carving tagua was brought to Sosote in 1993 by two local cousins who had spent several years in the Province of Guayas creating tagua pieces for an Italian man who exported them to Europe. Today, there are over 60 tagua workshops  in the Sosote area.

Below are photos showing the process of transforming the tagua nut into jewelry, which in Sosote usually takes place in a single location; i.e. the workshops are typically located behind the storefront that sells the finished products. 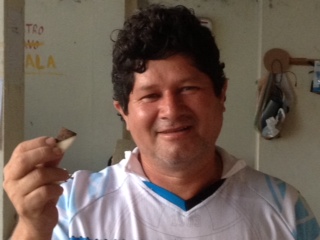 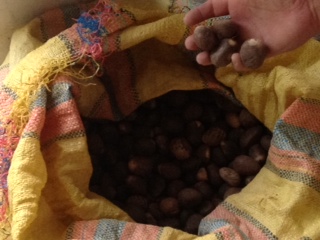 The process begins by collecting nuts from the palms (Phytelephas aequatorialis, which literally means “elephant plant”) 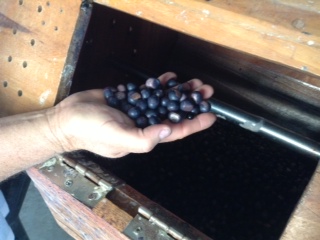 The nuts are polished using a tumbler with metal beads. 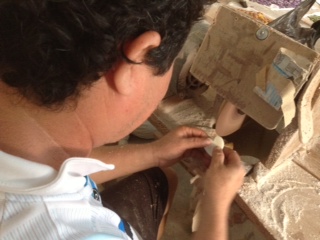 A grinder is used to shape the pieces. 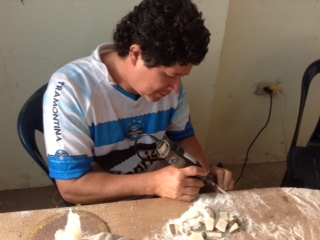 The pieces are then dyed in large batches. 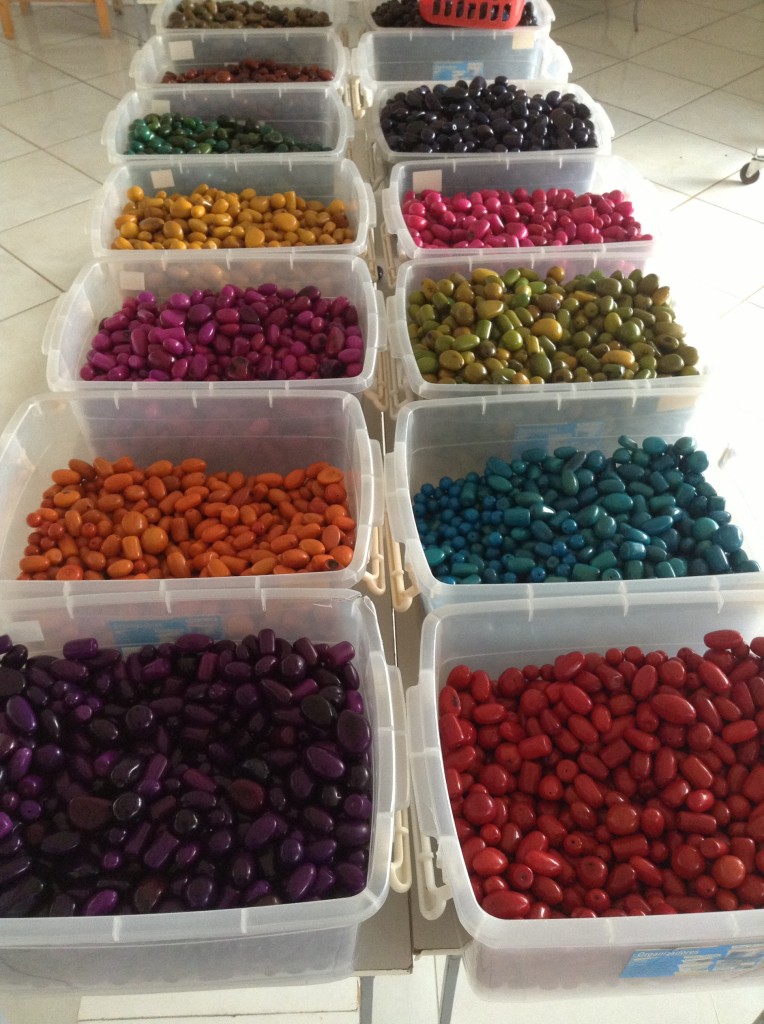 Now the tagua beads are ready to be turned into jewelry. 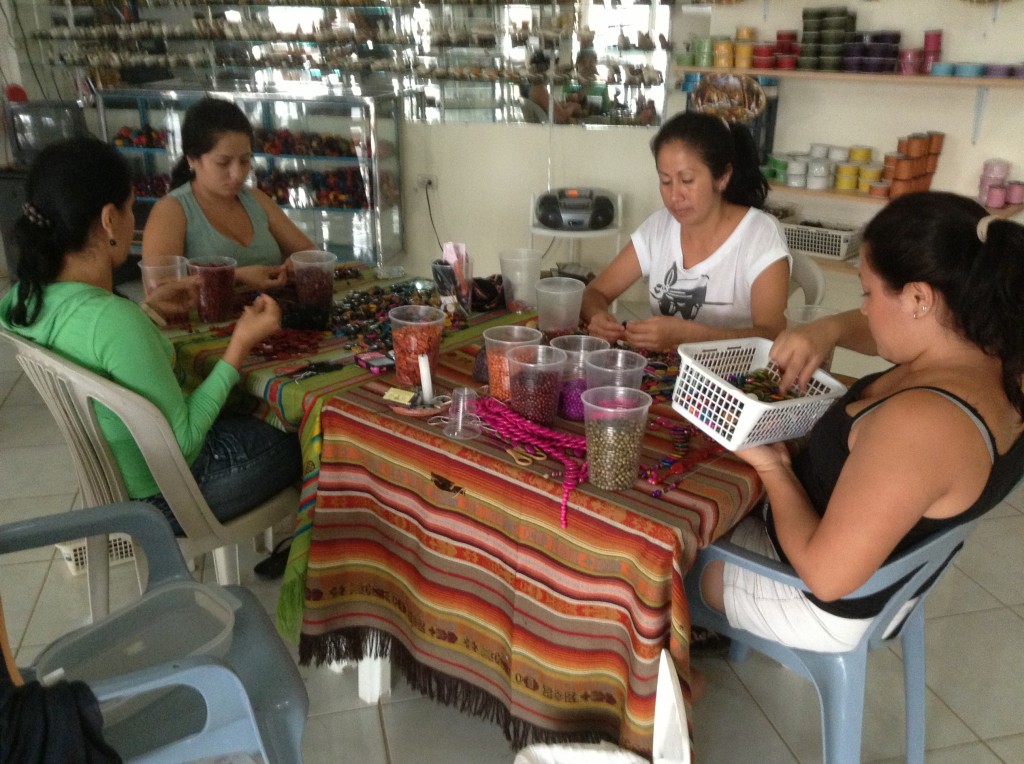 Women, often the wives and daughters of the tagua carvers, make necklaces, bracelets, and earrings in the store where they are sold. 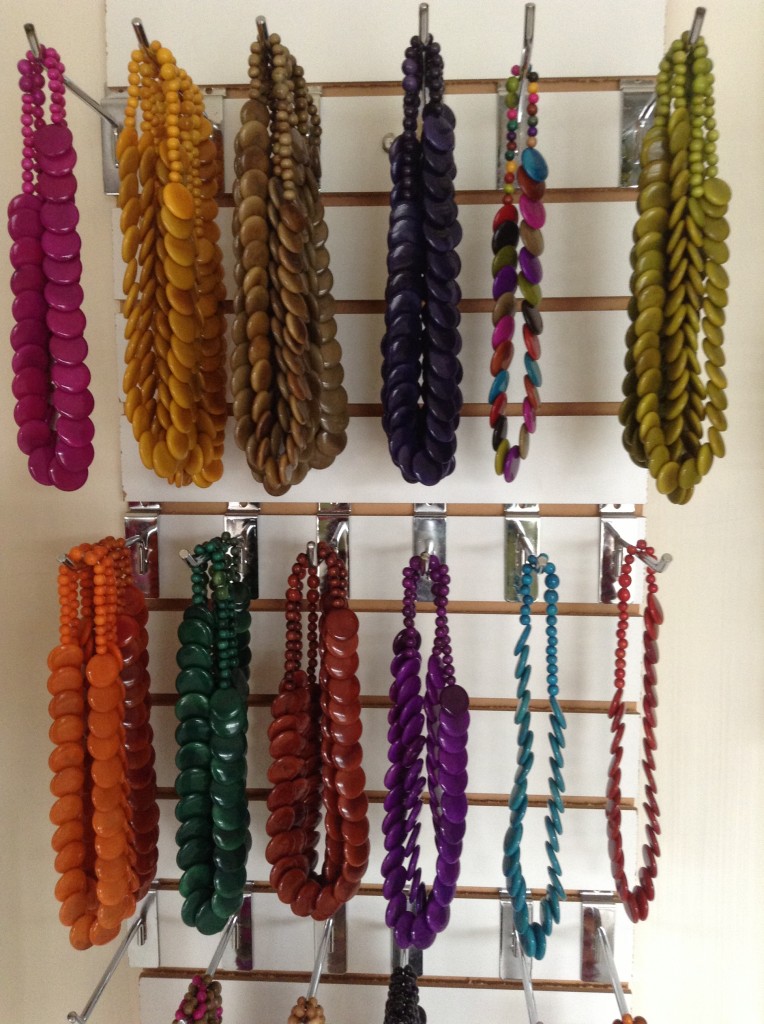 A sampling of some tagua necklaces. 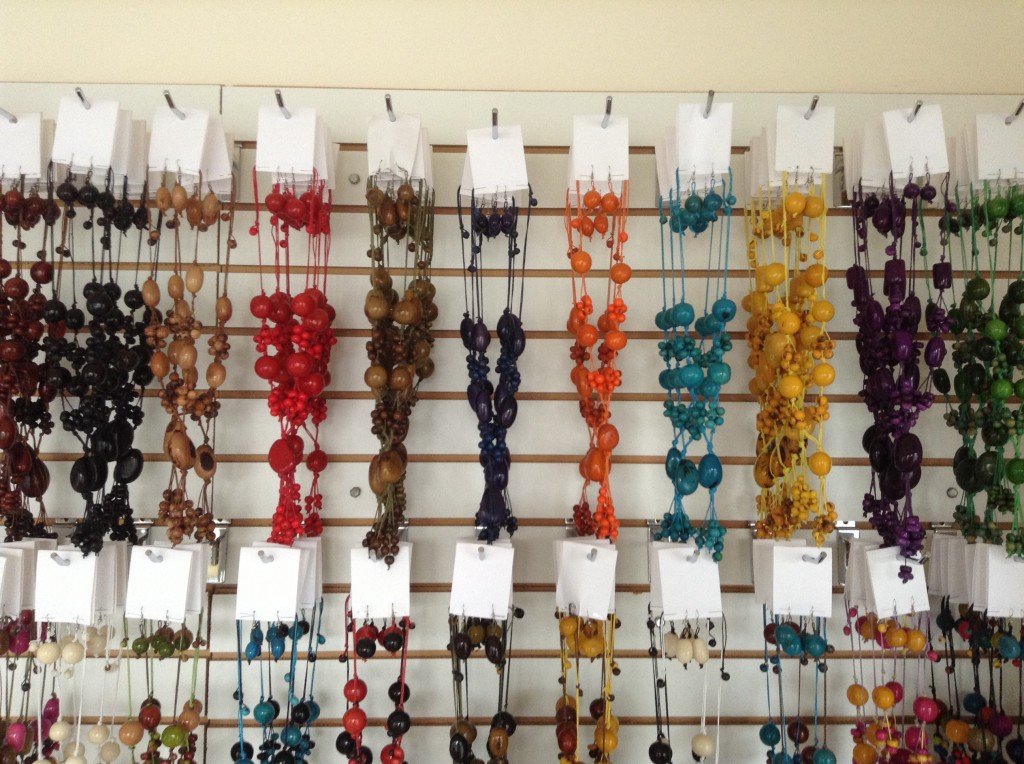 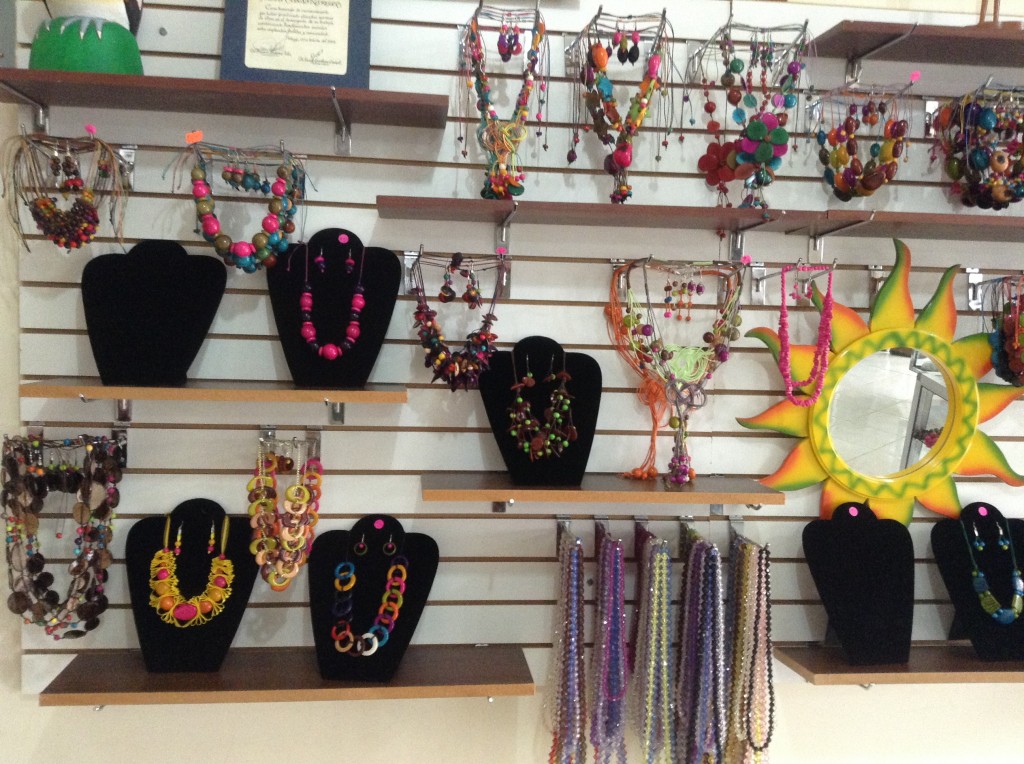 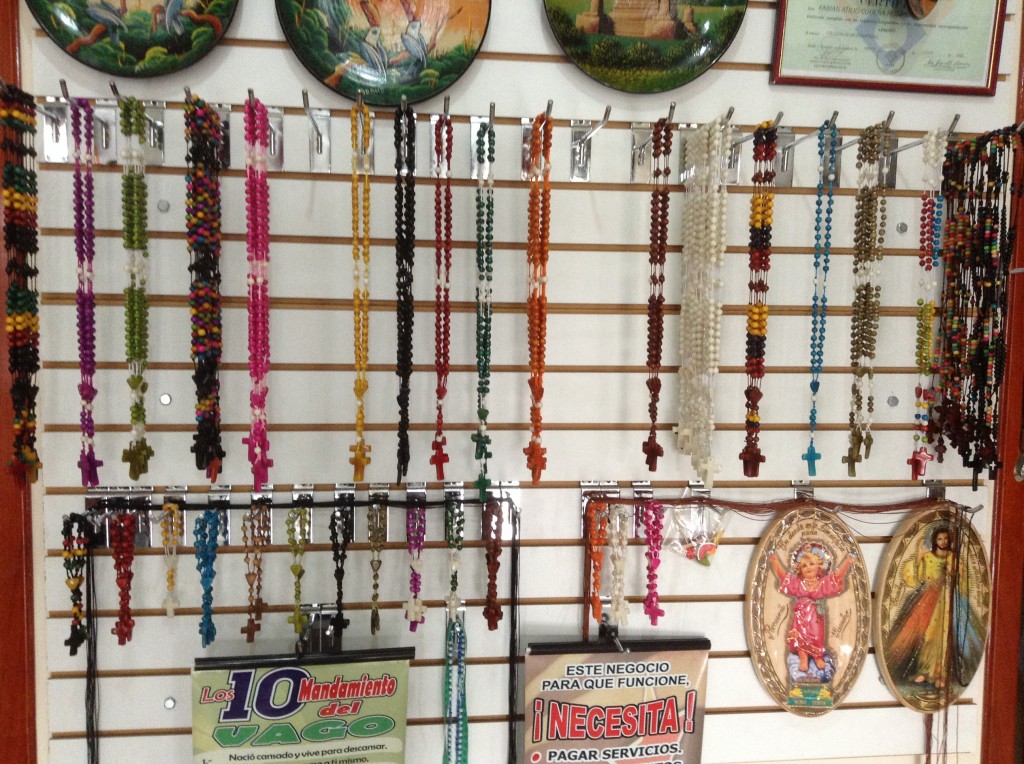 Selections are quite extensive and even include tagua rosaries. 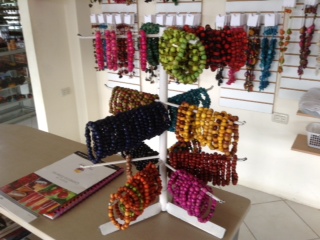 Tagua is also crafted into bracelets, earrings and rings. 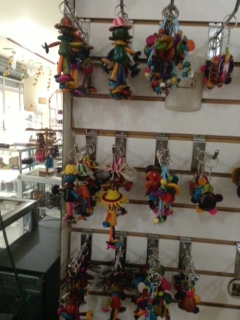 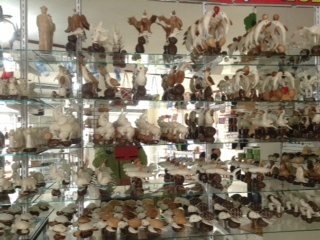 A variety of other tagua creations that make unique gifts for friends and family. 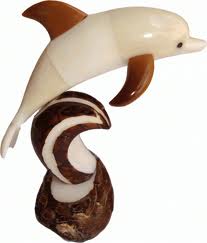 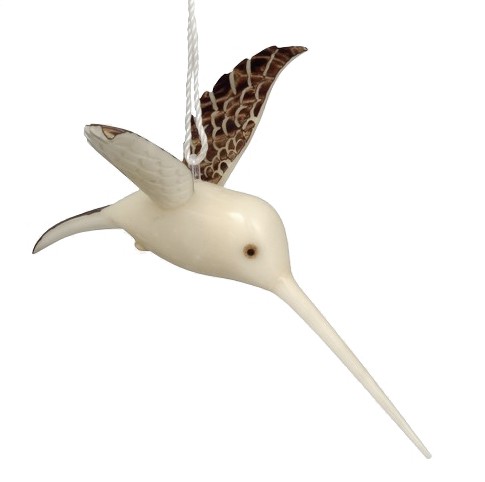 Tagua art and jewelry-making is an excellent example of how the purchase of local, sustainable products not only supports the creation of jobs but can also make important contributions to society and the environment. Ecuador is full of untapped niches such as these, many that are yet to be discovered.