February 23rd is election day throughout the country (referred to as “Elecciones Seccionales“).

Each of Ecuador’s 24 provinces will hold elections for the following political positions:

All are elected for 4-year terms without term restrictions. 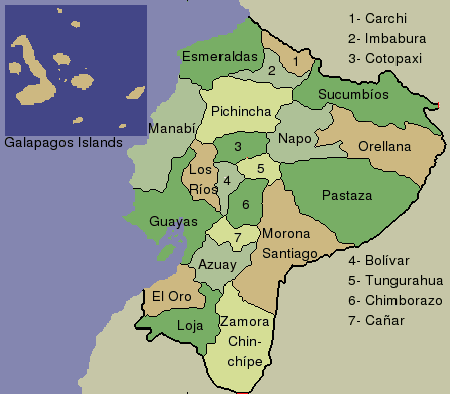 Ecuador, with a geographic area equivalent to the US state of Colorado, has 24 provinces.

Each province is comprised of cantones (cantons) which are further subdivided into parroquias (parishes) that are classified as either urban or rural.

In our case, we live in the town of San Clemente, which is affiliated with the rural parish of Charapotó, located in the Cantón of Sucre, in the Province of Manabí. The county seat of Sucre is the city of Bahia de Caráquez. The provincial capital of Manabí is the city of Portoviejo.

The coastal province of Manabi is subdivided into 22 cantons.

In Manabí, there are nine candidates running for prefect (and thus nine political parties represented). The current prefect, Mariano Zambrano has been in office since 2005 and is up for re-election. In our canton of Sucre, there are six mayoral candidates, two of which are female.

Here is the breakdown for the number of candidates elected for each political position in the Province of Manabí:

There are a LOT of political parties. There are 11 parties with seats in Parliament and 24 non-parliamentary parties. Each political party has a number and color scheme associated with it. For example, President Correa is affiliated with the Alianza PAIS party, with number 35 and its colors are lime green and dark blue. 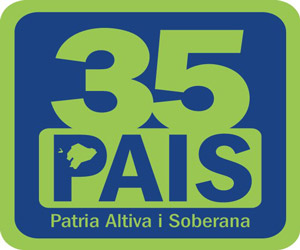 Political campaigning is restricted to a total of 6 weeks (January 7- February 20) and consists of an onslaught of tv and radio commercials, posters and flags on vehicles, homes, and businesses, parades of honking vehicles with blaring music, as well as wide scale painting of public and private walls with candidates’ names and their party numbers. 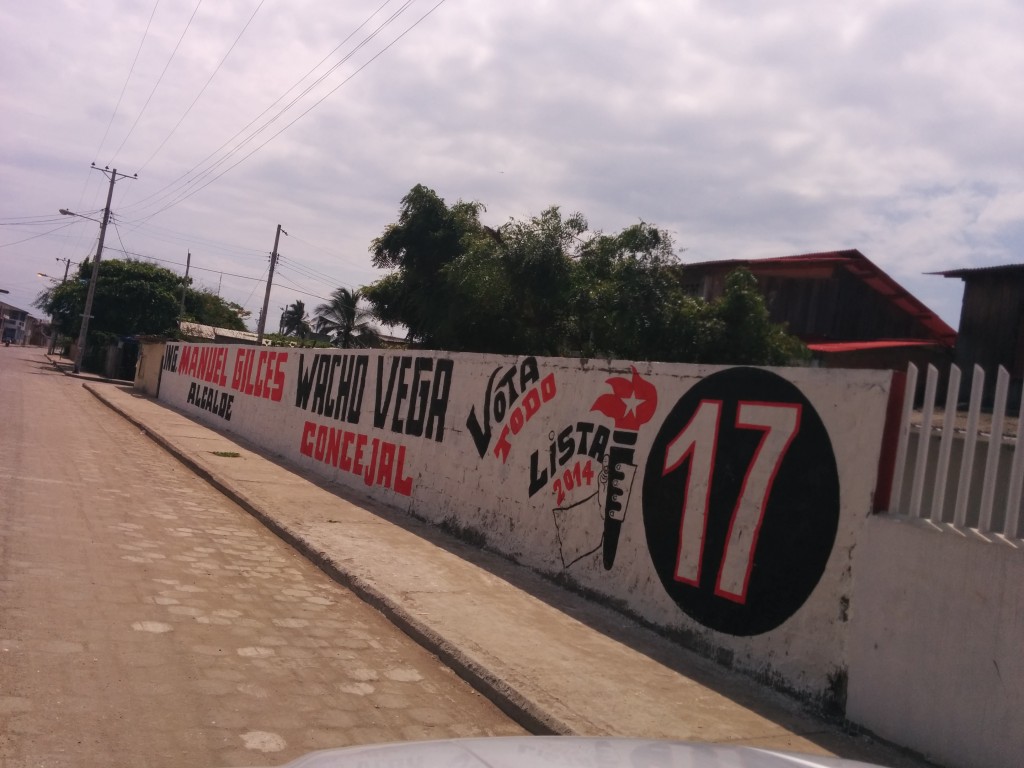 Walls are a primary way of political campaigning in Ecuador. This wall is located in San Clemente.

Voting is mandatory for Ecuadorian citizens between the ages of 18 and 65 residing in country. There is a monetary fine for not voting equivalent to 10% of the monthly minimum wage. After placing your vote you receive a “certificado de votación” or voting voucher that you are required to present for most kinds of applications such as opening a bank account, applying for marriage, etc.

Voting is optional for those aged 16 to 18 and over 65, for those serving in active military duty, for illiterate or disabled citizens, and for foreigners with legal residency.

Election results for the prefect and mayoral candidates will be determined the day of the election.

Also noteworthy is the fact that the sale and consumption of alcohol is prohibited 36 hours before the elections and 12 hours afterwards (starting at midnight on Feb 21 and ending at midnight on Feb 24). This law is called the “Ley Seca” or the Dry Law and is a real bummer to unsuspecting tourists and expats! …Sorry, Tom, guess we´ll be celebrating your birthday (Feb 22) this year at home!