We welcomed our son, Aiden Andrew, to the world on August 23. He was born in a wonderful birthing center outside of Quito. 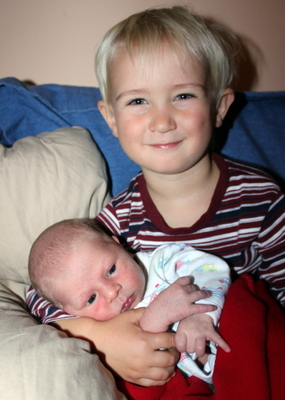 After a few days of rest, we spent a solid week running around Quito at the Registro Civil, the Ministry of Foreign Relations passport office, and the US Embassy to process all of the paperwork required to establish Aiden’s dual citizenship. As this was our second child born in Ecuador, we navigated the ins and outs of the country’s famously convoluted system of “tramites” with far more grace this round.

Running around with an infant in arms also quickly reminded us of some of Ecuador’s rather fascinating cultural peculiarities regarding babies. I’ve compiled a list of some of these infant-related idiosyncrasies that were surprising to us as new parents, especially coming from a different culture.

We’ve been surprised at the number of times our perspective has shifted as we begin to see things from another cultural vantage point.  Just as you see two distinct things if you look at a statue from the front versus the back,  a given experience can be interpreted from two different cultural viewpoints.  It’s the same statue, but what you see is completely determined by how you look at it.

For example, when we first arrived in Ecuador we sat at a restaurant, had a meal, and waited patiently for the bill.  And waited.  And waited some more.  Then finally, we hunted down the owner and, mildly flustered, requested the bill, PLEASE.  We saw “Bad Service” from our cultural viewpoint.  Then, after discussing this with an Ecuadorian friend he explained that traditionally if the owner brings you a bill before you’ve requested it, he is being rude and trying to rush you out of the restaurant.  The same experience from the owner’s vantage point was interpreted as “Being courteous and welcoming.”

In other words, things that at first make ZERO sense begin to make more sense the more you hang around.  We’ve learned to be open and enjoy our experiences here by following  a few general guidelines:  “Make fewer assumptions, ask more questions, and be open to the idea that there just might be another, equally valid, cultural viewpoint to an experience or situation.”  It makes for interesting detective work to ask, “Why might that make sense?”