The U.S. News & World Report ran an article on August 26, 2015 reporting that according to a survey of 14,000 expats in 64 countries, Ecuador topped the list of best countries to live in as an expat. This is the 2nd year that Ecuador made the number 1 spot. Click HERE to read the article. 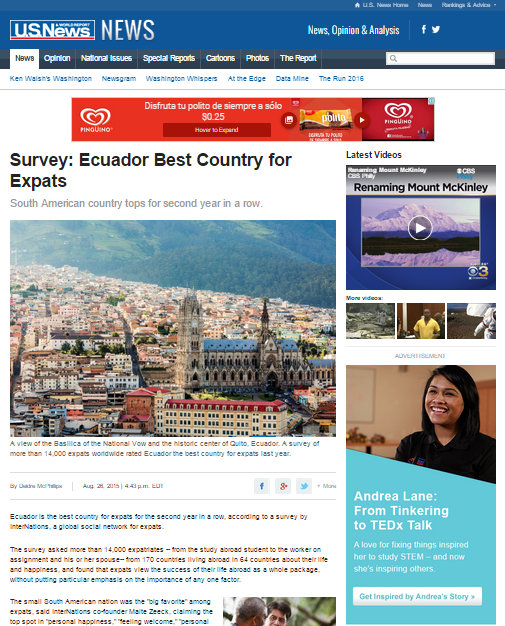 The survey was conducted by InterNations, a social network for expats with over two million online members around the world. Ecuador received the highest scores for the following subcategories: “personal happiness,” “feeling welcome,” “personal finance,” and “cost of living.”

As full time expats first coming to Ecuador in 2005 and then running a business and raising a family here since 2010, Tom and I have a pretty well-rounded perspective of life here on the coast of Ecuador. We can attest that, in our  own experiences, Ecuador deserves high marks for these subcategories. We have witnessed many clients who arrive here in fairly poor health and often stretched to the limit with stress, that, a year or so later, are hardly recognizable to their former selves, having lost a considerable amount of weight and donning flip flops, a golden tan, and a relaxed smile.

The caveat? Ecuador may well score high on these kinds of surveys, but there is absolutely no guarantee that relocating to Ecuador be will be the solution to your problems. We have seen firsthand that this is especially true for those expats who come here strictly seeking a lower cost of living.

“Wherever you go, there you are.” ~ Jon Kabat-Zinn

If you tend to be more of an optimist you will see the smiling, welcoming faces as you wave. You will see families laughing and playing volleyball or soccer together at the end of the day. You will notice the lack of beggars (at least here on the coast) despite there being evident poverty. You will see a gorgeous coastline with warm water and breathtaking sunsets. You will quickly make friends who welcome you, arms wide open, to dinner in their home at a moment’s notice.

If you tend to be more of a pessimist, you can be in the exact same time and space and experience an entirely different reality. You will see what you perceive as poor people lounging about in hammocks in front of their unfinished shack-like homes. You will see trash. You will see countless dogs roaming the streets and notice with alarm men walking around town with machetes in hand. If you do not tend to trust people, you will be suspicious, questioning people’s motives for being friendly to you. You will focus on the lack of efficiency, how “they” do “everything” here backwards compared to where you are from.

Speaking of which, an article came out yesterday in Cuenca High Life that provoked considerable commentary from its readers, entitled “The Arrogant Expat: Let me tell you how we do things in the USA.”  Important Note: If you come to Ecuador and attempt to change what you perceive to be wrong with it, you will drive yourself crazy.

A couple of related insider tips and insights:

While some of our clients have thrived as coastal Ecuador expats, there are others for whom Ecuador simply wasn’t a good match, high expat survey scores notwithstanding. Some arrived here and immediately did an about-face because their Ecuador experience did not match their expectations.

Then there are others who, like most of us, first delighted in Ecuador (the “honeymoon phase” of the widely accepted “stages of cultural adaptation“). 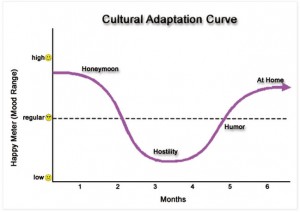 Four proposed stages of cultural adaptation (image taken from this site). I would venture to say that the realistic length of time for adapting is more like a year or two for most Ecuador expats.

During the honeymoon phase, newcomers appreciate and even celebrate the myriad differences in culture, food, and can find the humor in not being about to communicate well in the local language, at waking up at 4am to the crowing of a rooster in the city, or not being able to find products they were used to having back home.

However, as time passes, the honeymoon inevitably comes to a crashing halt and a new stage begins. Now the focus becomes disproportionately on what is wrong, instead of what is good and new. For some, this so-called “hostility stage” is but a passing phase as they continue to move through the ups and downs of adapting to a new culture and life. Those who eventually adapt arrive at a middle of the road experience where they generally accept and enjoy their new life. That is not to say there are no longer challenges, delays, or frustrations. But by now they have learned to better navigate the obstacles and move on.

There are others, however, who may stay stuck in the “hostility” phase. Their negative perception of their reality can become further compounded if they have already sold or moved everything they previously owned, cannot afford to return, and now feel trapped in a place where they are just as unhappy (or more so) than they were before relocating.

So if you have been considering becoming an expat in Ecuador:

(1) Do your due diligence and visit/rent first to make sure Ecuador will be a good match for you before you make the official leap;

(2) Come with an open mind and an open heart. Don’t assume you know better than the “locals.” There is a good chance that your perceived “solution” does not fit with the context in the same way it would back in your home country. Often, there actually is some semblance of logic where many new expats assume there to be none;

(3) Expect that, like anywhere in the world, you will face many unexpected challenges, especially as you are adapt culturally. Try your best to embrace the inevitable hurdles as they arrive and view them as opportunities for growth.

(4) Ecuador is no panacea for one’s problems. If you were unhappy in your home country, chances are you will find reasons to be unhappy here as well.  “Wherever you go, there you are. You take yourself with you.” 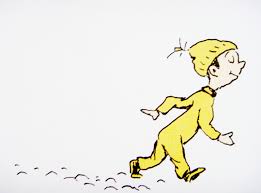