Kai and I are ending a two-week visit in the US visiting the grandparents (Tom stayed behind in Crucita keeping busy with exciting projects on the way).

Whenever I am back here in the States I am amazed by and appreciative of the orderliness of the cities and the perfectly smooth multi-lane highways (characteristics overtly missing from coastal Ecuador!). 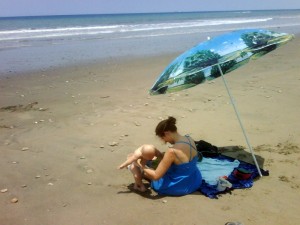 Kai practices for future strolls along the beach

But despite such luxuries, it never takes me long to miss home. Looking forward to the simple pleasures of waking up to the sound of the waves and birds, walks on the beach, fresh seafood, relaxing in my hammock… 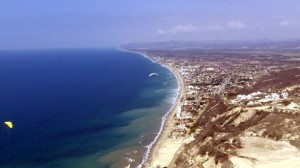 Tom's eye view: View of Crucita from his paraglider

When asked how we ended up in Cucita, Tom often tells of his experience of paraglidng along the quiet coast at sunset followed by a cold beer and tasty ceviche. We proceeded to call on many “se vende” signs and purchased our home here only a couple of days later…

The pairing of Crucita’s coastal breeze with the cliffs that line the southern end of her beach creates excellent year-round flying conditions. The skies often become filled with colorful paragliding wings on weekends and holidays. If you’re feeling adventurous, you can take a tandem flight or paragliding lessons to experience the incredible bird’s eye view for yourself.

Ecuador is a small country that feels immense because it has so many places to explore. In a 25 minute flight from Quito you can be on the coast or in the rainforest!  Just amazing!

Tom and I are continually discovering awesome new places in our neck of the woods. Less than an hour from Crucita is a tiny inland town near Portoviejo called Picoaza. The town sits at the base of a newly created 9,000 acre reserve that boasts five peaks that reach around 2,000 feet above sea level. The reserve offers hiking trails that begin in dry forests that transform into rainforest as you gain in elevation. Tom was particularly excited to hear about exposed volcanic rock that are supposedly good for climbing. The next time we return, no doubt Tom will have ropes, harness and climbing gear in tow. 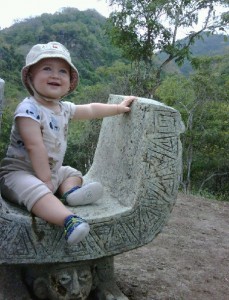 While learning about the flora and fauna from our local guide was great, what really impressed me was human history of the area. Cerro Jaboncillo was the site of an enormous pre-Incan settlement, perhaps with as many as 50,000 inhabitants! The peak was a strategic location allowing view of the surrounding areas including the ocean, which was key for trade. Archaeological evidence indicates that they used balsa sailboats to trade as far north as southern California and as far south as Chile.

As of yet, only about 140 acres have been cleared and studied for archaeological clues to this impressive society that created large underground grain silos and irrigation canals in addition to stone temples and beautiful ceramic pottery. Once uncovered, the site could rival Machu Picchu in size.